The wait is over!
The complete paperback edition of EXTINCTION BIOME: INVASION by Addison Gunn (aka. Malcolm Cross and Anne Tibbets) is in book stores everywhere! So go get it now! 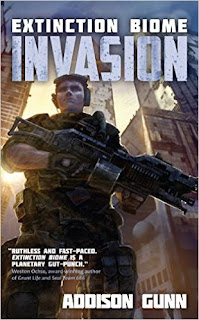 The last time this happened, T-Rex found itself on the menu. But mankind's got more than teeth – it's got guns. Miller and the men and women of COBALT are pressed into service to fight the onslaught, but they have no idea how cut-throat their corporate masters can be...
Posted by Anne Tibbets at 9:12 AM No comments: