The countdown toward the release of EXTINCTION BIOME: INVASION approaches! 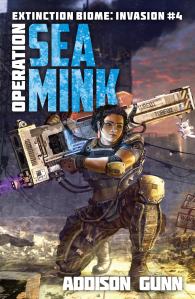 While collecting a team of Schaefer-Yeager scientists from Infected territory, Alex discovers the Archaeans, a group of Infected with a degree more control over themselves, falling victim less slowly to the Archaeobiome. He also meets their leader: his ex-girlfriend, Samantha.
On returning to the Compound, they learn that the nuclear warhead Harris had sent for had arrived in the East River, but the freighter was damaged, its crew lost or incapacitated. Gray sends Miller on OPERATION SEA MINK, a mission to retrieve the warhead before an increasingly paranoid and ambitious Harris gets to it...
Extinction Biome is a new military-SF series about a world overrun by an ancient ecology, awakened from a millennia-long dormancy to destroy the human race; and about the decisions we must make to try and survive.

Posted by Anne Tibbets at 9:07 AM No comments: