I am thrilled to announce that I will be working with the ever-elusive "Addison Gunn" on EXTINCTION BIOME: DISPERSAL - Book Two of the military science fiction series! 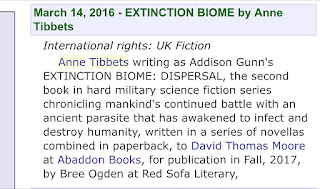 Posted by Anne Tibbets at 1:28 PM No comments: 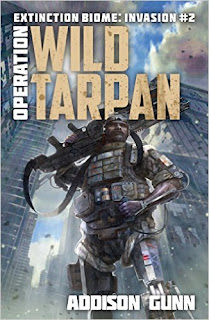 Major General Stockman and the U.S. Army 11th Infantry Division – infected, to a man and woman, with the Archaean Parasite – are marching on Schaeffer-Yeager’s Astoria Compound, intent on removing CEO L. Gray Matherson and destroying the corporation’s facilities. Gray’s plans need time; an evacuation is planned, but S-Y are far from ready. Alex Miller and his Cobalt team are assigned to OPERATION WILD TARPAN, a desperate bid to delay the coming attack...
Extinction Biome is a new military-SF series about a world overrun by an ancient ecology, awakened from a millennia-long dormancy to destroy the human race; and about the decisions we must make to try and survive.

For Purchase Links to Other On-line vendors: GO HERE
Posted by Anne Tibbets at 9:54 AM No comments: