I am so very pleased to announce my involvement in Abaddon Book's EXTINCTION BIOME series!

Together with a co-author we've crafted the first book under an accumulative pen name, Addison Gunn, for this new hard military science fiction series which will release in monthly ebook novellas starting in February, then in a full paperback edition this June!

It's been an absolute BLAST to work with Abaddon on this exciting project - it has everything I love in a good sci-fi - explosions, conspiracies, plentiful battles and perilous situations, and creepy, deadly creatures...What more could you ask for? 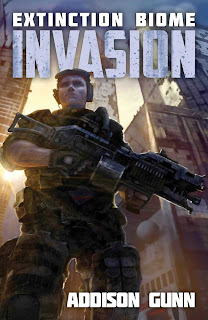